The First Rule of Housesitting… 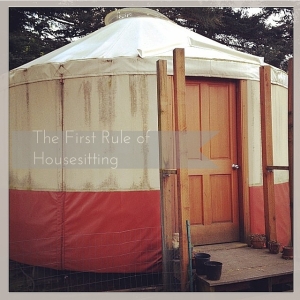 No, it’s not that we don’t talk about housesitting (will that Fight Club reference ever get old?).

The first rule of housesitting is that something always goes wrong.

For instance, there was the time I plugged in my laptop to the same socket that the air conditioner was using, and so the entire top floor lost power. All I had to do was go flip the switch in the fuse box, but due to some unfortunate labeling, I couldn’t figure out which one it was. Granted, it was also almost 1 a.m. at the time, and I might not have been thinking clearly. What I thought was this,

“Everyone in the neighborhood knows that I’m a single woman, staying in this house alone, and the power’s just gone out. Obviously this must be step one of someone’s nefarious plot to sneak into the house to rape and murder me. Quick! Run outside to the yurt and lock the yurt door! With only one way in-or-out, it’s a more defensible position!” 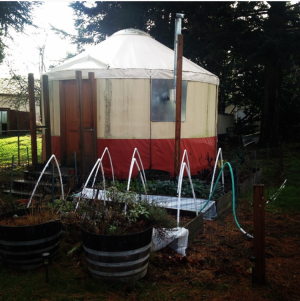 The infamous yurt. Scene of my own (imagined) slasher experience.

So that’s what I did. And then I called some friends the next morning who came right over, flipped the right switch, kindly only implied how idiotic I was instead of saying it out loud, and we all went on our merry ways.

What I learned from this (and the many other) housesitting adventures I’ve had over the years is that communication with the home owners is vital (and that you should just look for the flipped switch in the fuse box instead of trying to decipher the scrawled labels).

Case in point: when the clothes washer at a different home started leaking soapy water all over the floor, I was freaking out about how to handle it. If you’ve never had a tentacle of soapy water make its way across a hardwood floor to you in someone else’s home, you can’t imagine the instant panic that swept through me. OMG I’ve ruined their floor and their washer and I’ll have to replace it and it’ll bankrupt me and and and… was the initial thought in my head. Then I pulled myself together, called the home owner, and she said, “Oh yeah, that happens sometimes. Just put a towel down on the floor to sop it up.” If I had been too scared to tell the homeowner what happened, I would have been worried and upset for days, putting too much time into a problem that wasn’t really mine to solve.

Like when the refrigerator at another home died while I was housesitting. Apparently it was old (though it didn’t look like it), and the homeowners were thinking of replacing it anyway. They called someone who delivered a new fridge within 2 days and took the old one away. Things like that are the homeowner’s responsibility. Even so, it takes courage to speak up when you think you’ve done something to wreck someone’s home. In short, housesitting isn’t for the faint of heart!